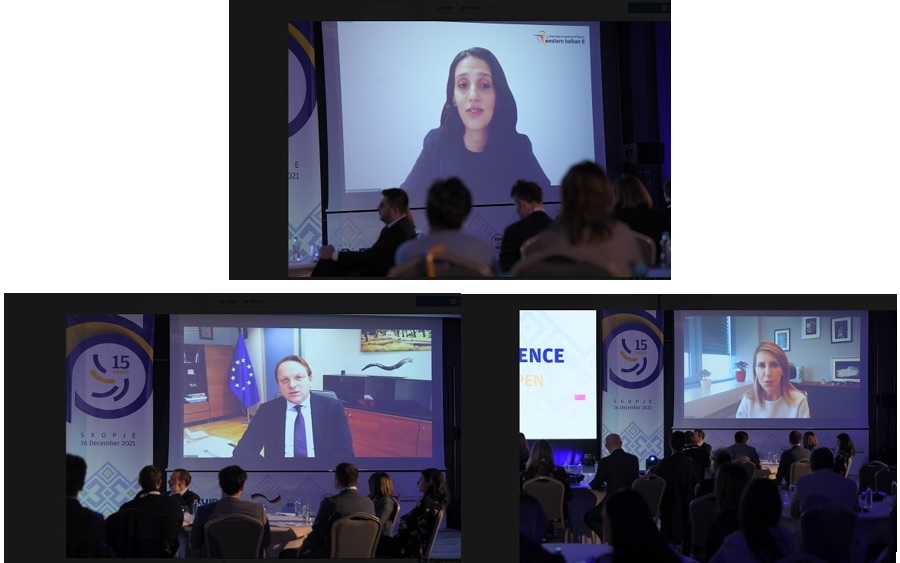 The Secretary General of the Western Balkans 6 Chamber Investment Forum Tatjana Shterjova Dushkovska participated in the CEFTA Week 2021 Conference “15 Years making trade happen”, organized in hybrid format in Skopje, on 16 December 2021.
Ms.Shterjova Dushkovska stated that the CIF, being the representative of the WB6 business community, has defined as a primary task to actively contribute to ensuring free movement of goods, services, people and capital throughout the region, in order to cut costs and make goods and services from the region more competitive on the global markets, but also to promote the Western Balkans as a single investment destination within this process.
– Earlier this week we have presented the Report summarizing key business insights on priority action points and the implementation of the CRM AP. We sincerely hope that for our next report we will have decisions and at least a few multilateral agreements whose implementation we will be able to measure and quantify, stated Shterjova Dushkovska, and briefly reflected on some of the companies’ insights from this report, which also bring light on priorities which should be set highest in the region’s economic development and in developing the region’s trade area:
– The waiting time at the border crossing points is still an issue for the companies from the region, and this needs to be minimized and predictable. Even more troublesome issue for the companies from the region are the waiting times between the region and the EU – highest average waiting time reaches 600 minutes on the BCPs connecting the WB countries to the EU markets. Infrastructure and staff, along with the border procedures, remain the key obstacles in providing smooth movement of goods within the Western Balkans, and given the long waiting times and the importance of the EU as the region’s main trade partner, the extension of the Green lines to the BCPs connecting the region to EU neighboring countries should be prioritized;
– Furthermore, 47,2% of the surveyed companies reported that they are facing some type of NTB – as response to that, the development of private-sector led trade obstacle alert mechanism, jointly by WB6 CIF as representative of regional businesses and CEFTA Secretariat, can lead to improved system of tracking NTBs on daily basis, as raised by affected companies, thus leading to their swifter resolution;
– Enabling companies to provide services across the region on equal term through the CEFTA AP6 implementation, in order to liberalize trade in services, should also be one of the priorities. The main barriers for providing services across the region stated by the companies are licenses, different technical standards, non-transparent rules and procedures. When it comes to e-commerce, almost 50% of the companies reported that customs procedure is amongst the most problematic issues, followed by issues related to logistics;
– Lengthy procedure for obtaining work permits was pointed out amongst most important obstacles for employment of residents from other Western Balkans economies, by almost half of the surveyed companies (55,3%);
– Finally, the results from the conducted survey indicate that companies are mostly oriented towards business operations in the domestic market, and potentials of interregional cooperation have not been used to the full capacity. Data confirms that striking 2/3 of the surveyed importing companies state finding no domestic production or insufficient quality of the domestic production as a reason for import, confirming that in the following years the activities for implementation of the Regional Supplier Development Program lead by the WB6 CIF, aimed at better linking regional businesses in supply chains with potential focus on developing joint regional final products, should be further supported.

Shterjova Dushkovska stated that despite the slow progress in the implementation of the CRM AP, the results of the conducted survey confirm that the action points defined in the CRM AP still remain valid requests of the regional business community and that businesses across the region expect to see visible shifts related to the issues selected as Key Priority Areas. For these reasons, WB6 CIF call upon decision makers and stakeholders throughout the region to give priority to implementing the Key deliverables under the CRM Action Plan and to speed up the implementation of free movement of people, goods, services and capital.

The CEFTA Week 2021 started with official meetings of CEFTA bodies and several workshops, organized in cooperation with the partners of the European Union Intellectual Property Office, USAID Northern Macedonia and the Investment Forum 6 in the Western Balkans and with the support of the European Commission. The events were dedicated to trade-related topics arising from the Common Regional Market Action Plan, such as e-commerce, recognition of certificates and procedures, qualifications, licenses, intellectual property rights.