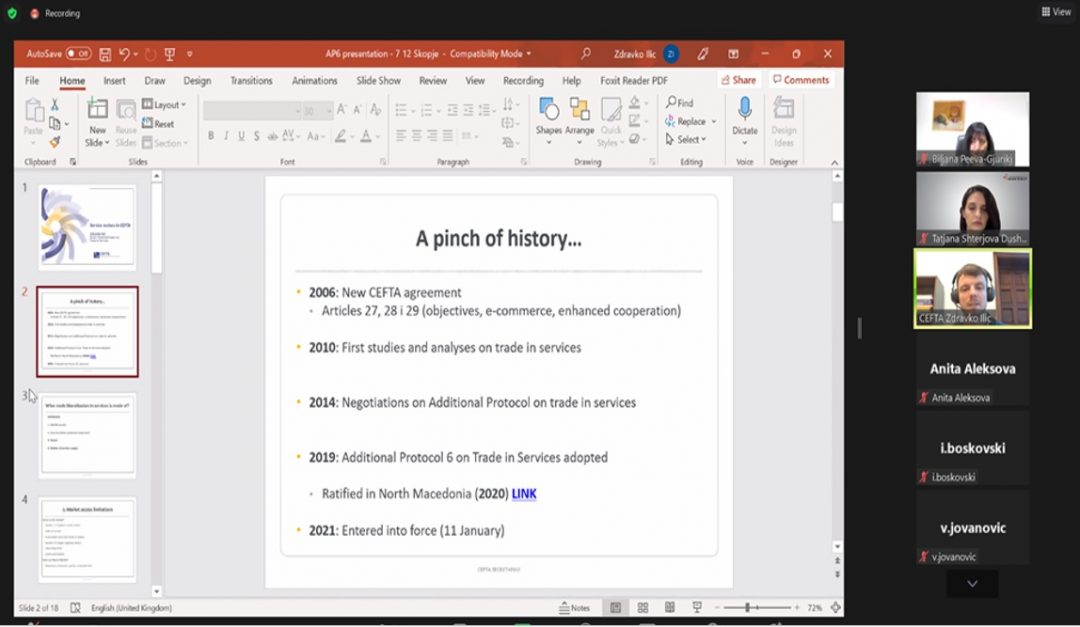 The CEFTA Secretariat in cooperation with the WB6 Chamber Investment Forum and the Economic Chamber of North Macedonia, organized a workshop on CEFTA Additional Protocol 6 for trade in services, focusing on the benefits of the protocol for the Macedonian economy and the region and how it can contribute to the more successful creation of a Common Regional Market in the Western Balkans.
The Additional Protocol 6 provides a comprehensive framework for trade in services in the region, which is based on the General Agreement on Trade in Services (GATS). In more than 100 different sectors, the CEFTA parties have committed themselves to not imposing, or if they already exist removing, market access restrictions, and to providing the same treatment to domestic service providers and those from other CEFTA party signatories. In addition to these provisions, the Protocol provides a framework for the work of further removal of barriers, especially in sensitive areas of the economy such as: licenses, permits, professional qualifications.
“Thanks to AP6 on Trade in Services (DP6), the CEFTA Free Trade Agreement system has been improved and has now been extended to the service sector. The protocol in principle obliges the Parties not to impose restrictions on market access and to treat companies from other parties to the CEFTA agreement as domestic. Additionally, the Protocol opens up opportunities for the removal of specific barriers in the future. We believe that this measure will contribute to strengthening economic cooperation and creating a common market in the Western Balkans, and thus will directly improve business conditions for all businesses in the region,” said Zdravko Ilic, service trade expert from the CEFTA Secretariat.
“Reduced barriers mean increased trust, open doors for greater co-operation, more joint ventures and projects across the region. In the process of creating a Common Regional Market, which essentially should ensure the free movement of people, goods, services and capital throughout the region, the Protocol addresses issues that are essential, and the business community in the region is looking forward to its full implementation. In the same direction are some of the activities that the WB6 CIF is implementing with the support of the EU, is offering to companies in the region – these activities include mapping service providers in the Western Balkans in order to include them in regional supply chains, as well as the functionalities of the two databases that are being prepared (Market access and Market Intelligence Database) which should make it easier for companies to find information about access to one of the other markets in the region, networking with new partners and joint participation in events”, said Tatjana Shterjova Dushkovska, Secretary General of the Comoros Investment Forum.
CEFTA Additional Protocol 6 on Trade in Services was adopted in 2019 and entered into force on 11 January 2021.