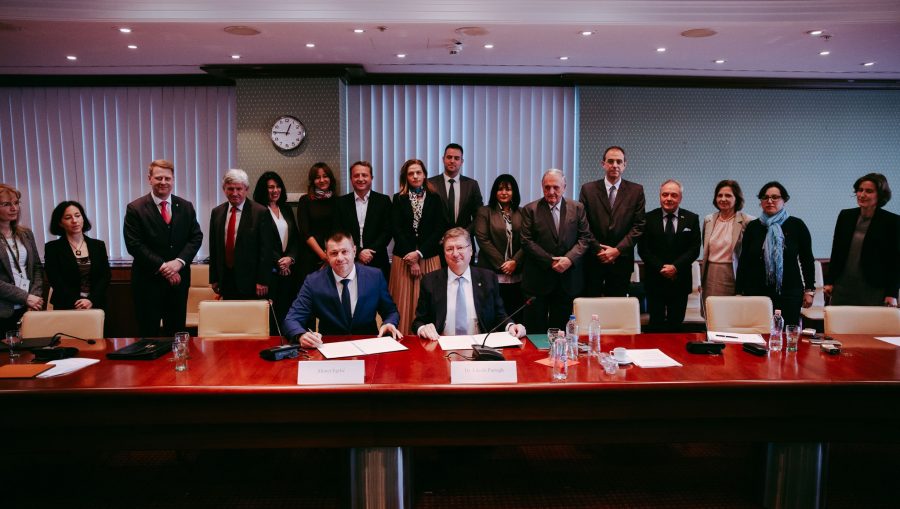 In the premises of the Hungarian Chamber of Commerce, representatives of the Western Balkans 6 Chamber Investment Forum and the Visegrad Group signed a Joint Declaration defining further steps for future cooperation. During the meeting, which was attended by representatives of the Chambers of Commerce of Albania, Bosnia and Herzegovina, Kosovo, Montenegro, Northern Macedonia and Serbia on the one side and Hungary, Poland, Czech Republic and Slovakia on the other side, discussed about current economic indicators of each of the countries. pandemics and activities undertaken by the chambers in order to support businessmen and economic recovery.

The President of the Foreign Trade Chamber of Bosnia and Herzegovina Ahmet Egrlić greeted participants and on behalf of the WB6 CIF expressed gratitude and satisfaction because this association is gaining new partners that it will contribute to further development and greater recognition of WB6 CIF  in international circles. The signed Joint Declaration is certainly a good basis and WB6 CIF will work diligently on its implementation in the coming period. The President especially thanked for the support that the Visegrad Group provides to the integration of the region into the European Union.

Among other things the Joint Declaration states that Visegrad Group and  the WB6 CIF strongly support the need for establishing an effective legal framework agreement with the aim to integrate the rules governing the free movement of goods, services, persons, and capital, especially the need to secure fast flow of goods between the two region. Highest priority should be given to the issues of shortening border lines, reducing waiting times and technical formalities at the border crossing points connecting the V4 and the WB6. For these reasons, the parties give priority to the issue of expanding the Green Lines to the Border crossing points between Hungary and Serbia, as stated in the Economic and Investment Plan for the Western Balkans and the Common regional Market Action Plan.