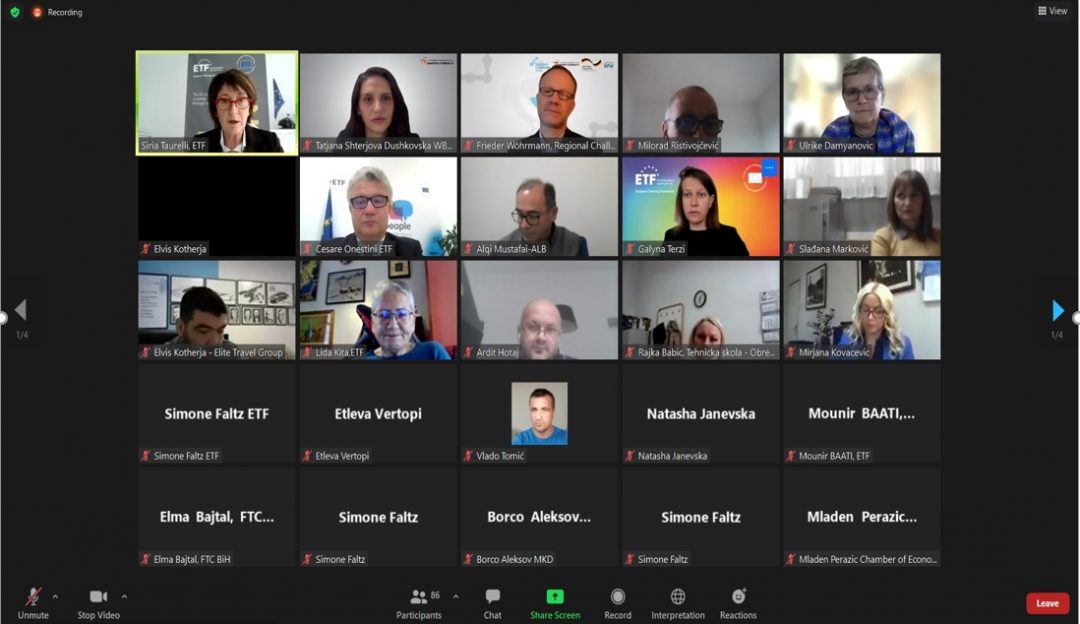 The way in which Public Private Partnerships (PPPs) can function as part of the implementation of policies to improve skills delivery and labour market-relevance was under the spotlight Thursday (14 October, 2021) at the online conference: How Public Private Partnerships Support Skills Development in South Eastern Europe and Turkey?, hosted by the European Training Foundation and the Western Balkans 6 Chamber Investment Forum (WB6 CIF).
The event, which brought together experts from public and private sector organisations in the Western Balkans economies and Turkey, took as its starting point the findings of a new ETF study PPPs for Skills Development, an in-depth survey of 23 cases studies of PPPs located in 14 countries.
Published in two volumes, the study looks at both what PPPs do and how they function, and detailed case studies and reviews according to analysis using ETF study methodology.
The study found that PPPs in Europe, neighbouring countries and around the world, have evolved over recent years beyond classic “closed” contract agreements between the private sector (industry, companies, chambers of commerce) and public sector (national and regional authorities, vocational training and skills providers).
Siria Taurelli, the ETF’s Coordinator for Governance and Quality Assurance, told participants that the study had identified three types of PPP that now existed: “functional families” where the partnership was formed around quality assurance or skills forecasting – so-called “knowledge” PPPs; VET-provision oriented partnerships where the delivery of skills was the key focus; and resource-oriented, where the purpose might be the provision of specialised training equipment or investment into training infrastructure. These further broke down into three keys types – the partnership that “permeates the system” and can be replicated across regions and countries; partnerships with elements that are recognised across the system and have the potential for growth; and ad-hoc arrangements that are often experimental or developed to address specific issues and challenges.
The study also identified PPPs with open membership (as opposed to the “classic PPP” where membership is set in a contract); semi-open PPPs, often sector-specific; and closed PPPs where a specific aim precludes the admission of new members.
The study showed that there are now examples of all types of PPPs operating within and across regions and economies around the world.
Tatjana Shterjova Dushkovska, Secretary General of the WB6 CIF, noted that the flexibility afforded by different approaches to PPPs allowed for “the synergies of all related stakeholders.”
“We cannot have sustainable development and economic growth in the region without quality knowledge, skills and competences that people can apply in different vocational areas.
“The Chamber investment forum and all the six chambers have been actively committed to the task of increasing the quality of the education system, especially related to providing relevant and market suitable education including on the job training – which is now a trend in the region.”
By pooling resources and creating synergies and partnerships between the private and public sectors, skills development can be matched more effectively to market needs, she added.
Her remarks were echoed by speakers and panel discussion participants who described a wide range of initiatives that included advanced AI and VR training for deaf machine operators at leading Turkish industrial conglomerate Türk Traktör, a new approach to increasing youth employment in Serbia, Education to Employment (E2E), established by the Swiss development agency and Serbian government, where private companies, municipalities and NGOs cooperate to broker effective non-formal training courses across a range of sectors, achieving up to 85% employability within a year of the programme, an innovative Belgian project “Duo for a Job” that aims to increase assimilation and job opportunities for young unemployed aged 18-30 by matching them with recent retirees who make their social capital available to help them connect to employers, and representatives from the national chambers of commerce from Albania, Kosovo, Montenegro and North Macedonia, who reflected on the positive practices of PPPs in this area in their national economies. Additionally, the Regional Challenge Fund, a unique instrument connecting companies in need of skilled labour with vocational training institutes (VTIs) that use a unique cooperative training approach in all Western Balkans economies, was presented. The Fund was commissioned by the German Federal Ministry for Economic Cooperation and Development (BMZ), delegated to KFW Development Bank, and is executed by the Western Balkans 6 Chamber Investment Forum.
Cesare Onestini, ETF Director, said that the study into PPPs has shown that, “the effectiveness and durability of a partnership translates into better skills development for those involved. The quality of a partnership really does translate into higher quality.”