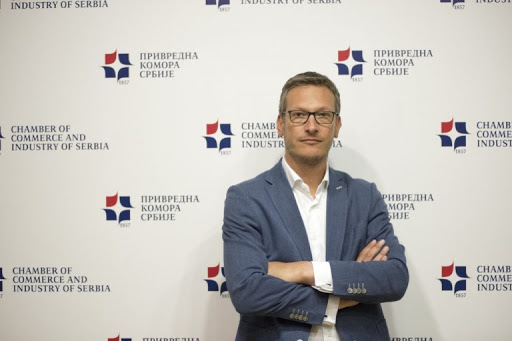 The new railway from Belgrade to the border with North Macedonia will bring new investments, safer and more environmentally friendly transport, lower costs and greater competition for the entire region. Thanks to bilateral agreements from 2019, Serbia and North Macedonia are showing great progress in facilitating trade and removing barriers, says Mihailo Vesović, director of the Sector for Strategic Analysis, Services and Internationalization of Chamber of Commerce and Industry of Serbia.

In an interview with the Macedonian group of portals (biznisinfo.mk, standard.mk and lokalno.mk), Vesović said that the economic relations between Serbia and North Macedonia, which are on the rise, are based on dynamic trade, but in addition to trade there are real opportunities for even greater investment and greater economic cooperation.

Although the trade between the two countries in 2020 amounted to 860.5 million euros and was lower by 4.2 percent compared to the year before, and exports to North Macedonia decreased by 4.6 percent compared to 2019, this year we expect that our trade will exceed the psychological limit of one billion euros (!), Vesović pointed out, stating that the growth of trade of 4.9 percent in the first quarter of this year speaks in favor of that, the growth of exports from Serbia to North Macedonia of 12.5 compared to the first quarter of 2020, and the increase of imports by as much as 23.3 percent.

When it comes to the region, business is still accompanied by obstacles that are most often the result of non-compliance of certificates that accompany goods. We do not have direct payment transactions between certain markets, we have different standards for certain products, we do not apply electronic documents enough, and in some markets we even have cases of restrictions on trade in non-tariff barriers. In this sense, the “Little Schengen” initiative can contribute to accelerating economic development, EU integration and improving good neighborly relations. Therefore, we support any initiative that will accelerate the creation of a common regional market, Vesović said.

The Board of Directors of the Chamber Investment Forum recently formed a special body whose task will be to intensify our joint activities to attract investment. We want to make the most of our benefits that are expected to bring by the implementation of the Common Regional Market, as well as the implementation of the EU economic and investment plan for the Western Balkans. In postcovid time, we see a great chance in the field of transformation of global value chains, so-called “Nearshoring” in which large systems look for suppliers at a nearby products.

When it comes to roads and transport, Serbia and North Macedonia are in the lead in relation to the region because they already have an integrated border crossing and, from 2019, joint control at the Preševo-Tabanovce crossing. Thanks to harmonized regulations and procedures, certificates, working hours of border services, trucks with goods pass without being detained at the border.