Western Balkan Six Chamber Investment Forum (WB6 CIF) organized an online consultative meeting between representatives of the European Commission and steel companies from the region.
With the Implementing Regulation (Commission Implementing Regulation (EU) 2019/159 of 31 January 2019 imposing definitive safeguard measures against imports of certain steel products), the Commission determined the measures to be in place for a period of three years (including the period of imposition of the provisional measures), and this period expires on June 30th 2021. The measure currently in force consists of a tariff- rate quota (‘TRQ’), based on historical imports, which is applicable to imports into the Union of each of the 26 product categories comprising the product concerned. Where the relevant tariff-rate quota is exhausted, an additional duty of 25 % is levied on the net, free-at-Union-frontier price.
At the moment, the EC is conducting an investigation on possible extension of the safeguard measures applicable to imports of certain steel products. In the course of the investigation, the Commission focuses its assessment, notably, on whether the safeguard measure continues to be necessary to prevent or remedy serious injury, whether there is evidence that Union producers are adjusting, and whether a prolongation would be in the Union interest. The investigation will also determine the appropriate duration of the extension (if any).
The introduced safeguard measures directly affect the operations of steel companies of the Western Balkans countries, and in May 2020 WB6 CIF called upon the EU to exempt the Western Balkans from the existing steel safeguard measures, based on the special trade relationship these countries have with the EU, and the vital importance of this industry for the WB6 national economies.
At today’s meeting, WB6 CIF Secretary General Tatjana Shterjova Dushkovska gave brief introduction of safety measures and she also emphasized a significance of the metal industry for the Region. According to data, iron and steel producers significantly participate in the GDP of national economies and they employ more than 10 000 workers in the Region. Moreover, 67 percent of total export of iron and steel from WB6 economies is directed to EU market.

As the representatives of the European Commission pointed out, the EU is very interested in the Western Balkans Region and its integration into the European Union. Proof of this is the support provided by the European Commission in various ways, including financial support through the implementation of the current project implemented via Chamber Investment Forum, but also the financial support provided for the WB6 economies for fight against COVID Pandemic and the Economic and Investment Plan for the Western Balkans. The fear of companies about the threat to their business is understandable and justified, but as the representatives of the EC pointed out, only the official procedure is an option for approaching this problem.

Representatives of the companies participating at the meeting used the opportunity and gave brief insight related to the most important issues of their companies’ operations. In the discussion, the companies pointed out the following issues:
– This industry is of vital importance for the national economies of all 6 WB countries, given their participation in the national GDP and in the national exports, thus the limitations for their access to EU markets creates serious negative effects for the national economies;
– For most of the companies concerned with the safeguards measures, the EU markets are the primary destination, and the introduced safeguard measures have caused decrease in their sales volumes to the EU up to 30%;
– The national markets for these products are practically non-existing, and they could not absorb the residual quantities. Additionally, with the safeguard measures limiting access to the EU markets for some of the world’s biggest steel producers, the companies from the WB6 region are facing distortions in their domestic markets by products overflowing them from non-EU countries;
– The companies from the region do not have such great production capacities, and are not in the position to endanger the EU steel market;
– The companies for the region primarily import raw materials from the EU, and that circumstance should also be taken into consideration when determining the treatment of the steel products from WB countries;
– The safeguards measures and the quotas system create difficulties for companies to plan their production and dispatch, and also to manage timing of deliveries to heir customers;
– All WB countries have special trade and partnership relationship with the EU, reflected through the SSAs concluded with these countries, and this relationship should grant the companies coming from WB countries a specific treatment as to any other third-country entering EU market;

In the conclusions of the meeting, the participating companies expressed once again a request that, on the basis of the grounds elaborated by the companies in the discussion, WB6 companies should be exempt from the safeguard measures, in case they are extended after 30 June 2021. 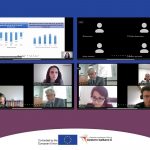 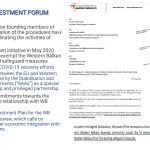 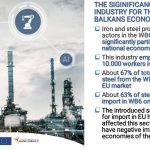