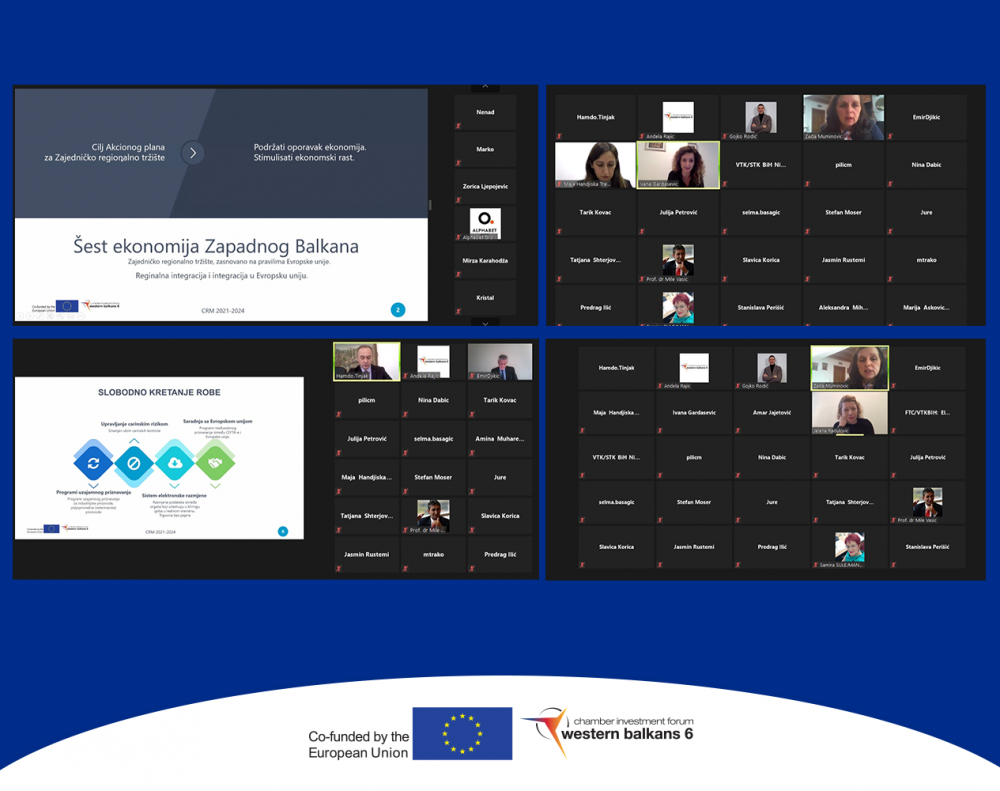 Within the project ” EU support to the Western Balkans Six Chamber Investment Forum”, on March 22, 2021, an online info day was held on the topic “Implementation of the Common Regional Market Plan (CRM) – Benefits and challenges for the business in Bosnia and Herzegovina “.
The event was attended by about 60 participants, representatives of companies, institutions and other organizations. On behalf of the Foreign Trade Chamber of Bosnia and Herzegovina as a host of this event, participants were greeted by Nihad Bajramović, Deputy Secretary General.
Newly appointed WB6 CIF Secretary General Tatjana Sterjova Duskovska, introduced participants to the role of the Association in the implementation of the CRM. She stressed the importance of including private sector which may have a key role in providing additional inputs and support decision makers in creating the Common Regional Market and further on in integration of the Region in EU.
Speakers at the event were Hamdo Tinjak, State Coordinator for Common Regional Market in B&H, Emir Djikic, Director of the CEFTA Secretariat, Maja Handjiska Trendafilova and Ivana Gardasevic from the Regional Cooperation Council (RCC), Amar Jajetovic, representative of Sarajevski Kiseljak and member of the WB6 CIF Business Council and Jelena Radulovic, WB6 CIF representative.
The Action Plan for the Common Regional Market, principles, structures and target values were presented in detail, with an emphasis on the benefits that the Action Plan brings to the B&H business community.
Within the potential and expected effect of the trade cooperation in the region, common mechanisms for trade facilitation and removal of non-tariff barriers were presented and explained, some of them are already in operation, and some have yet to be adopted. The changes in legislation regulation that are expected and the impact on the operations of companies in Bosnia and Herzegovina, what are the measures that will be proposed to reduce trade costs were also presented.
In addition, representatives of the Regional Cooperation Council presented other aspects of the Action Plan for CRM which are related to the expected effects on the business environment within the regional investment, digital, industrial and innovation area of the Action Plan for CRM, and specific measures to be adopted to support investment in the region.
Jelena Radulović from the Chamber of Commerce and Industry of Serbia presented the method of monitoring the implementation of the Action Plan by WB6 CIF through a specially developed Key Performance indicators measurement model that will annually monitor the implementation of the plan through two steps – regulatory and implementation, i.e. whether a measure is implemented in the field and whether companies benefit from that implementation.