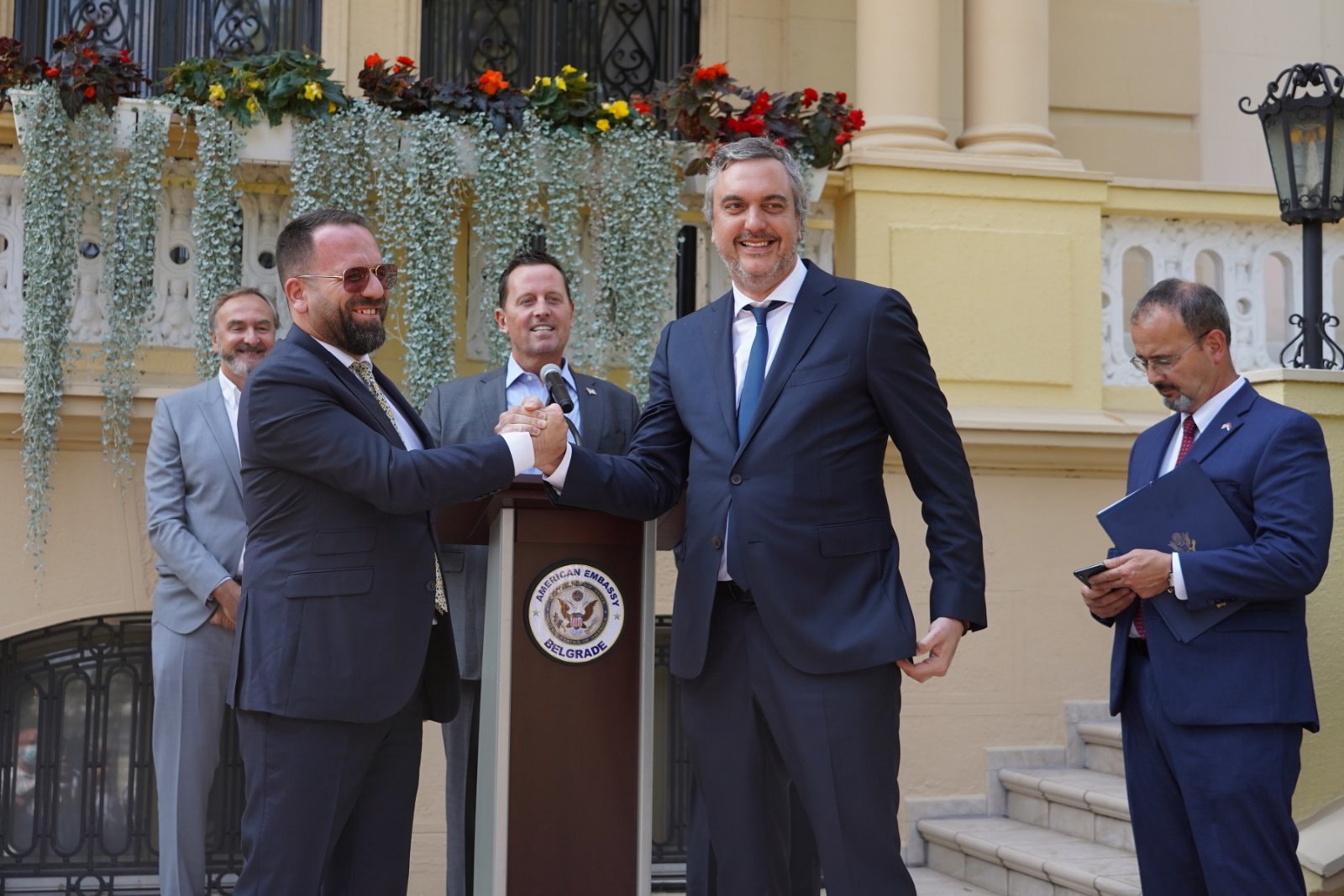 Cadez and Rukiqi: We are establishing a joint team of businessmen to support projects

The presidents of the Serbian Chamber of Commerce (CCIS) and the Kosovo Chamber of Commerce (KCC), Marko Cadez and Berat Rukiqi, announced in a joint statement after a meeting with Richard Grenell, Donald Trump’s special envoy for Belgrade-Pristina dialogue and Adam Boehler, Executive Director of the US International Development Finance corporation (DFC) the establishment of a joint team which will help more efficient project implementation, as a contribution of business communities to the economic normalization envisaged by the Washington agreements.

The two-chamber economic cooperation team, with offices in Belgrade and Pristina, composed of business leaders and economic experts, will assist governments, the business community, DFC, EXIM Bank, US and European Union institutions, and to all participants in the processes of economic normalization.

Within the framework of the team, as stated in the joint statement, special groups will be formed to consider, monitor and develop sectoral and individual projects.

The infrastructure development group will contribute to the continuation of the construction of the “Peace Highway”, the reconstruction and modernization of railway lines, their connection with ports on the Adriatic Sea, infrastructural equipment of industrial zones and the provision of technology for energy production from waste.

The production and diversification group of sustainable energy will provide support for the opening of a regional power plant based on lithium technology, exploration and exploitation of lithium and other precious ores.

It is also planned to establish a special team to build a glass factory that would supply producers of alcoholic and non-alcoholic beverages in the entire region with glass packaging, as well as agro tourism, in order to explore opportunities and use potentials for sustainable tourism based on natural resources of tourist destinations such as Kopaonik, Brezovica and Rugovska canyon.

Cadez and Rukiqi, acting on behalf of the business community, expressed their support for the improvement of economic and overall relations between the two sides, especially the agreements signed in Washington and the process of normalization as a precondition for economic, social and political development in the Western Balkans. As presidents of the national chambers of commerce – the main advocates of free trade and economic integration in the region, in particular, they voiced a strong supportto the “Mini Schengen” initiative to strengthen regional cooperation based on the four fundamental freedoms of the European Union. They believe that this is an important step towards prosperity and the improvement of stability and competitiveness of the entire region.

“We are convinced that the engagement of the US International Development Finance Corporation (DFC) with partners and its continued presence in the region demonstrates the strong commitment of the United States to contribute to better economic perspectives of entire Western Balkans region,” the presidents of CCIS and KCC pointed out in their joint statement.

It is necessary, they point out, that both parties remain firmly committed to the signed agreements and to ensure their implementation through a carefully crafted action plan that guarantees success and maximum benefits.

The two chambers, relying on successful cooperation from previous years, will continue to provide assistance in order to achieve sustainable economic normalization, Cadez and Rukiqi emphasized.

Implementation of previously signed agreements on re-establishment of air traffic between Belgrade and Pristina, renewal and modernization of railway infrastructure on the “eastern” route – Nis-Doljevac-Merdare-Pristina and construction of “peace highway” – Nis-Merdare-Pristina, according to the president of CCIS and KCC will provide the basis and instruments for significantly improving competitiveness, economic cohesion and connectivity throughout the Western Balkans region.

“We express our readiness to proactively participate in providing support to all parties in identifying projects, conducting feasibility studies and other necessary activities aimed at improving the diversification of energy supply and contribution to economic, social and environmental development and benefits for local communities,” it is stated in the joint statement.

The presidents of the Chambers of Commerce of Serbia and Kosovo welcomed the DFC’s commitment to provide financing for the guarantee scheme for lending to small and medium enterprises, which will have a positive impact on both economies, especially in eliminating the consequences of the COVID19 pandemic.

As representatives of the business communities, Cadez and Rukiqi called on “all those interested to actively participate in advancing the economic normalization envisaged by the Washington and other agreements, in order to engage the creative, economic, natural and scientific potential of the entire region, with their full and timely implementation.”

Richard Grenell, the special adviser to the president of the United States for the dialogue between Belgrade and Pristina, and the head of the DFC, Adam Boehler, expect continuity in the realization of the agreement from Washington. That it is about the commitment of the US government, says Grenell, is evidenced by the fact that only two weeks after the Washington agreement, a never larger US delegation arrived in Belgrade to visit Serbia, since the time of Jimmy Carter, and perhaps in the entire history of relations between the two countries. That shows the full attention that the US government dedicates to this region, says Grenell.

Grenell said that the Washington Agreement and the agreements reached in Belgrade are not just words on paper, but also mean new jobs for the people living in this region and private sector development.

A part of the American delegation is talking to companies in Serbia today in Belgrade about specific projects, which could be realized through DFC.

Cadez explained that one part of the projects from the Washington agreement is related to infrastructure, the other to revive projects that “fell asleep” due to the corona virus pandemic, such as air and trade connections, then projects related to bank guarantees for small and medium enterprises, which is extremely important and which will be important for creating new jobs.

“The practical result is very important for us, because after a long time we can talk about business in Belgrade and Pristina. Numerous political topics flooded us and did not give any perspective, did not create jobs, did not bring investments to the region. I see a lot of enthusiasm in Pristina, as well as here in Belgrade. “There is an impetus for both sides to work together, create new jobs and projects, for a better perspective of the region,” Rukiqi said.