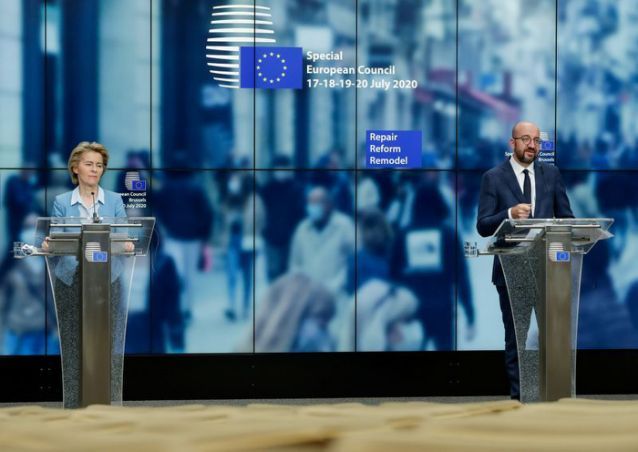 The leaders of the 27 member states of the European Union reached an agreement after 100 hours of marathon negotiations on the multi-annual joint budget 2021-2027 and the recovery fund.
A common EU budget of € 1.824 billion for the period 2021 to 2027 has been agreed, as well as a € 750 billion EU recovery fund, of which € 390 billion from the recovery fund will be grants, while 360 billions of euros to be injected into European economies as favorable loans. A compromise was reached with the so-called “frugal five” – Sweden, Finland, Denmark, Austria and the Netherlands, which had the most objections to the initial plan, which provided for 500 billion euros in grants and 250 billion euros in loans.
This package will serve the EU’s economic recovery from the corona crisis.
The final agreement envisages the distribution of budget funds by areas, the Cohesion, resilience and values has the largest amount of 322 billion euros, the Natural resources and the environment 240 billion euros, the Single Market, Innovation and Digitalization 132.7 billion euros, the Migration and border management 22.6 billion euros, Security and Defense 13.1 billion euros, European public administration 73.1 billion euros and the Neighborhood and the World 98.4 billion euros.
Within the Neighborhood and World Fund, 12.5 billion euros will be available to the countries in the process of European integration, through the Instrument for Pre-Accession Assistance – IPA in the period until 2027. In the previous budget period, 11.7 billion euros were allocated for IPA funds.
Following the news of the agreement reached at the EU Summit, the euro rose to a four-month level of $ 1.1470.
In addition to the fund for recovery from the crisis, the leaders of the EU countries pointed out that the funds that will be allocated within the European framework programs are of exceptional importance. The new program Horizon Europe 2021-2027 through which in the next seven years companies will have the opportunity to apply for projects that would mean investing in new technologies, increasing their competitiveness and above all investments aimed at building greater export opportunities. The companies will have the same opportunity to use these funds through projects as European countries. The IPA Pre-Accession Assistance Fund will total 12,565M euros.
The European Green Agreement as a new growth strategy of the European Union that was reached earlier this year will be the basis for further development of the economy and the creation of programs that should help the EU to be climate neutral by 2050. To this end, the EU will implement a series of initiatives that will protect the environment and strengthen the green economy. The commission will propose a European Climate Law, turning political affiliation into a legal obligation and an incentive for investment. Achieving this goal will require action from all sectors of the European economy: industry, construction, energy, mobility.
The EU will also provide financial support and technical assistance to help the people, businesses and regions most affected by the transition to a green economy. This is called the Fair Transition Mechanism and will help raise at least € 100 billion between 2021 and 2027 in the busiest regions.
The WB6 CIF thorough the package four of the project EU support to Western Balkan Six Chamber Investment Forum, Activity 4.3. Setting up services supporting integration of SMEs in European and global value chains, will support its members to set up and deliver service supporting the SMEs to upgrade their digitalization capacity in order to make them more attractive for entering the European and global value chains. For selected number of companies the WB6 CIF will enable expert support service in order to provide thorough analysis of existing digital transformation capacities. Based on this analysis the SME will benefit from expert support in creating digitalization strategy in areas of importance for involvement into the supply networks of the international companies.