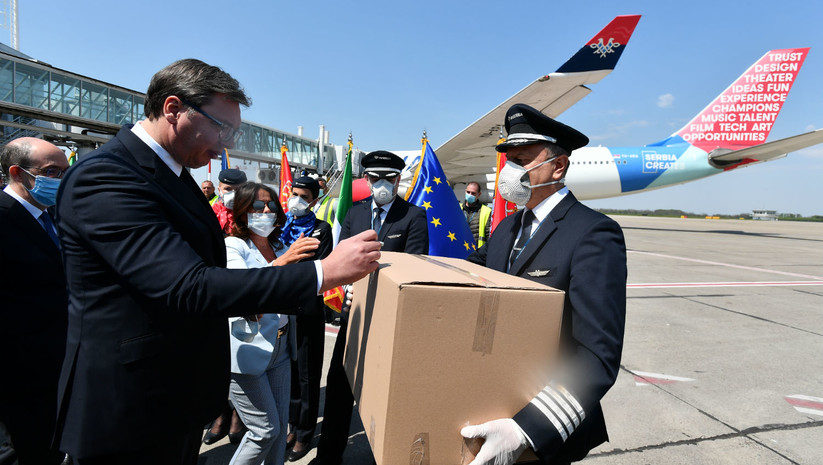 April 27, 2020 | by Dejan Azeski
Planes full with material aid, doctors and other medical staff and even free accommodation for the elderly in the most affected areas” are just some of the things that Western Balkan countries have offered to help Italy with. In this way they express solidarity with most affected European country of the Covid 19 crises. WB6 countries are much smaller and economically weaker that Italy, but they are historically connected to their neighbor of the Apenine peninsula and in this difficult times they don’t forget the role and friendship of Italy in the last decades.
Being the biggest country from WB6, and the country with biggest economical cooperation with Italy, Republic of Serbia is naturally a leader in the amount of help sent to affected regions. Personally, Serbian President Aleksandar Vucic from Nikola Tesla Airport sent four of the eight  planes to help Italy as it is planned.– Serbia has enough equipment, so we think that now, the most important thing is to give it and help our Italian friends. Our help is not big and these products we bought were paid by the citizens of Serbia. We supplied our warehouses. We sent two million surgical masks, two million epidemiological masks, one million gloves. Maybe we could have done more, but this is a gesture to show how much Italy means to us, said President Vucic, sending a message of condolences to all those who died.
Except this, official Belgrade is constantly offering their support to the government in Rome.

Albania is geographically closest to Italy, and probably because of that was the first country to offer and send help.More than ninety doctors and medical technicians have been sent from Albania to Italy until now and they have been actively engaged in the Brescia region. At the airport in Rome, they were greeted by Italian Foreign Minister Luigi Di Mayo, who also thanked Prime Minister Edi Rama for, as he put it, this gift given to Italy in these difficult times.

He also announced his arrival on social media, calling it a “great confirmation of friendship.”

-I thank Prime Minister Edi Rama, the entire Government and Albanian people for the second great certificate of friendship, for the concrete sign of the people who will go to save the lives of our fellow citizens and at the same time help our doctors and nurses in the fight against the virus that bears the first positive signs- wrote Di Mayo.

In this crises everybody helps with what they have. Montenegro has already announced that after the end of the pandemic, Montenegro will host older Italian citizens in coastal facilities.

-I am glad that the Prime Minister of Italy, Giuseppe Conte, has accepted my offer from Montenegro, when the opportunity arises, to host older citizens, especially from Lombardy, in our coastal facilities,- Markovic wrote on Twitter.

As he said, Montenegro supports Italy and the most vulnerable categories in their personal and social recovery. Markovic noted that Montenegro particularly appreciates that Italy, even when it was hardest hit by the pandemic, offered NATO assistance in transporting medical equipment.

-I believe that this special gesture of Montenegro, as Conte pointed out, confirms the commitment of our country in the spirit of solidarity to support Italy and the European fight against the pandemic,- Markovic added.

The Association of Balkan Chambers WB6 CIF, located in Trieste, was also directly involved in the overall solidarity ambience with Italy in these difficult times.

-All our institution and whole economy of the Balkan is at your disposal with all our capabilities. Also the WB6 CIF office in Trieste have been operating and are on your disposal 24 hours a day. We are sure that the word solidarity is very important in this moment, but we believe that the joining of forces and capacities that we have between Italy and the Balkans is even more important. And therefore we are sure we have enough energy from this to come out much stronger together- is said in the letter of solidarity from the WB6 CIF Association to the governors of three most affected areas of Northern Italy.