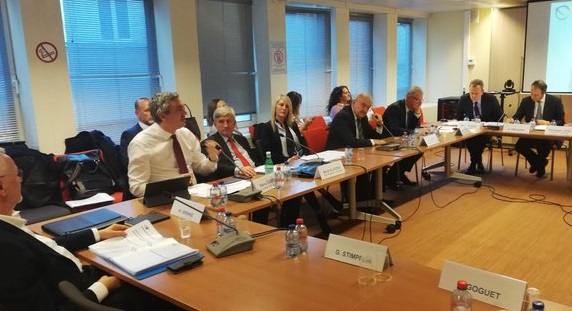 Cadez: Re-launch of commercial flights between Kosovo and Serbia a big step for businesses

President of Serbian Chamber of Commerce Marko Cadez said in Brussels yesterday that agreement on establishing a direct flight between Belgrade and Prishtina is a big step towards greater exchange, in the context of free movement of people, especially businessmen for whom it is important to communicate and do business.

The agreement was also strongly welcomed today by the Chamber of Commerce and Industry of Serbia and the Kosovo Chamber of Commerce, with a joint statement signed by chamber presidents Marko Cadez and Berat Rukiqi, urging “authorities to agree without delay on the necessary technical details for the renewal of flights”.

“We hope that this will open a dialogue on some other issues that are still open, such as tax issue, which hinder the normalization of Belgrade-Prishtina relations today and are crucial for our region”, Cadez said.

According to Cadez, this may not seem to people as something that affects the daily life of citizens, but it is important, he says, because it enables those involved in business to make new business arrangements, which will benefit everyone.

“Re-establishing the airline between Belgrade and Prishtina after two decades will enable better connection of our citizens, create conditions for more successful contacts of business communities of Serbia, Kosovo and the Western Balkans and contribute to the process of normalization of Belgrade-Prishtina relations”, Cadez and Rukiqi emphasized in their joint statement.

The statement noted that the very process of establishing dialogue and cooperation between the two chambers, started under the auspices of the Eurochambres in 2013, was aimed at bringing business communities closer, removing barriers, improving the overall business climate in Serbia, Kosovo and the region as a whole, as a contribution strengthening trust and normalizing relations between the two parties.

One of the priorities of the inter-chamber dialogue, in addition to establishing postal and rail services, was the renewal of direct flights between Belgrade and Prishtina, as an additional tool that would help remove barriers to freedom of movement, the two chambers said in a statement.