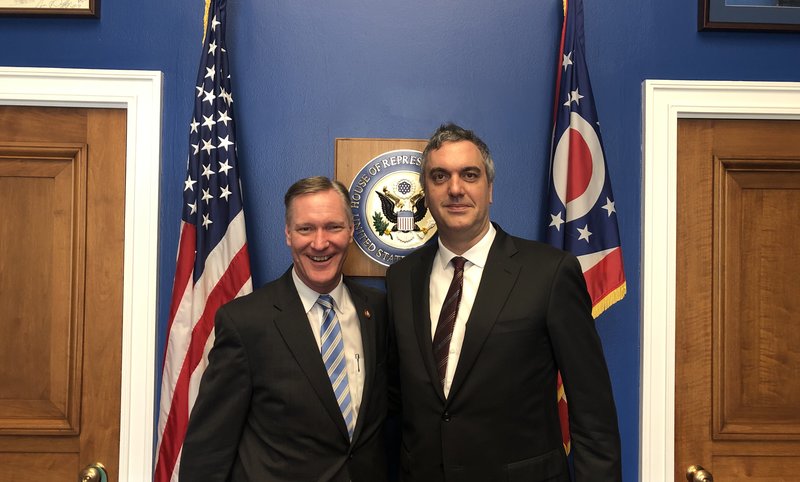 The Western Balkans can count on the support of US institutions and business associations in creating a common regional market and improving the business climate, attracting new investors, and better positioning the growing IT community in the US market, whose innovative products are already being used by US companies and institutions. This was stated by Marko Cadez, President of the WB6 CIF Managing Board and President of the Serbian Chamber of Commerce (CCIS), who is on a three-day visit to Washington, after talks with the US Congress, the Senate, the U.S. Commerce Department and the IT Industry Council.

In conversation with President Cadez, Republican Congressman Steve Stivers accepted the invitation to organize and personally lead an economic delegation from the USA that would visit the region.

In addition to the advantages of stronger regional integration for economic growth, development and greater stability in the region, Cadez also spoke with the US official about the role the US could play with a new economic approach to addressing the Balkan challenges. He also recalled the consequences of resolving problems with barriers to trade the region is facing, such as the taxes that Kosovo has imposed on Bosnia and Herzegovina and Serbia, which are damaging not only the B&H and Serbian economies but also Kosovo businesses, as well as international companies operating in the region.

Western Balkans regional integration, willingness to help further and support the ongoing regional processes, as well as to strengthen trade and investment ties with the US, marked a conversation with David De Falco, Deputy Assistant Secretary of Trade.

De Falco expressed particular interest in the investments and business operations of US companies in the region and in concrete projects in which US investors could invest their capital in the future. He also pointed out the importance of continuing reforms to improve the business environment and encouraged the Western Balkans countries to further develop its ICT sector, Cadez said.

One of the topics also discussed was global trade negotiations and mechanisms that would prevent the effects of trade disputes from spilling over to less developed countries and regions, such as the Western Balkans.

ICT is certainly one of the most promising sectors for the co-operation of the Western Balkans region and the US, which now holds a third of the global IT services market and is among the most innovative countries in the world being the seat of the largest multinational technology companies, Cadez estimated.

This was the focus of the meeting with Josh Kallmer, Vice President of the Information Technology Industry Council (ITI), a US organization that is the global voice representing the interests of leading innovation companies in the information technology industry and an important advocate for developing policies, standards, and regulations that promote innovation and growth for the tech industry.

“We are very pleased with positive evaluations of our activities on digitizing the economy, increasing the export of IT services and developing educational programs for the education of IT professionals as well as the support to the CCIS initiative to open a Serbian House in the Silicon Valley, which would host entrepreneurs and technology professionals from Serbia and the Western Balkans, strengthening ties with this global technological hub“, Cadez said.

He also announced an upcoming visit of representatives of the US IT Industry Council to the Western Balkans. The significance of that visit, he says, is best illustrated by the fact that members of this Council are companies like Apple, Google, Ebay, Facebook, Microsoft, IBM, Samsung, Amazon, Canon, Adobe, Erricson, Intel, LG, Fujitsu, CISCO, Acer Sony.