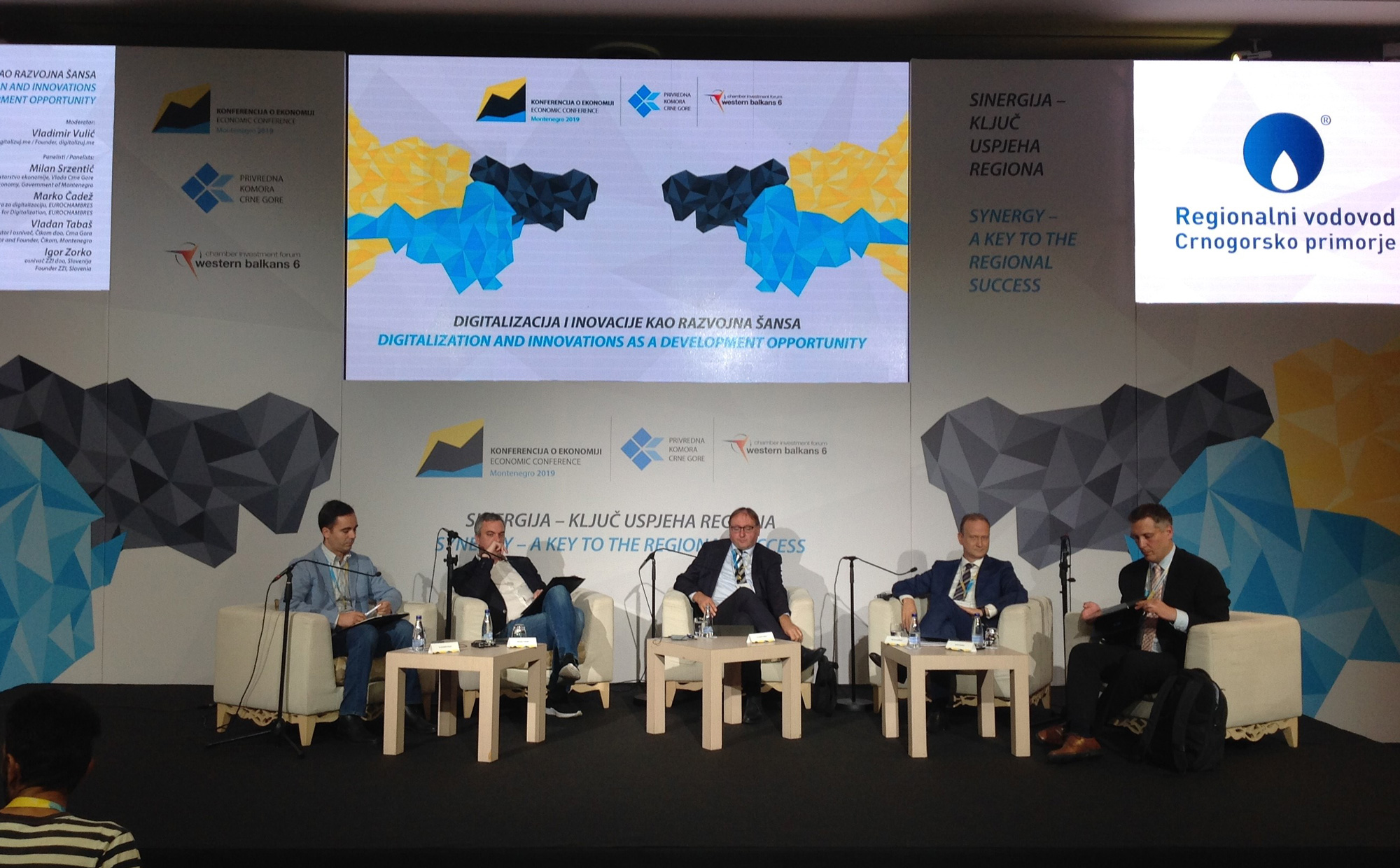 Marko Cadez: The Western Balkan region has world-class experts in the field of digitization

Although some European indicators say the Western Balkans region is lagging behind the EU in the field of digitization, engineers and startups from the region are making great strides in developing innovative solutions used by citizens around the world, said President of the WB6 CIF Chamber Investment Forum and President of the Chamber of Commerce and Industry of Serbia Marko Cadez.

Speaking at a panel on “Digitization and Innovation as a Development Opportunity” at the tratiditional Economic Conference Montenegro 2019 titled “Synergy – the Key to the Success of the Region” in Budva, Marko Cadez, who is also chairman of the Committee for Digitization of the Eurochamber, said that whatever world portal in the gaming industry people used, 97 percent chances are that the backend software is done in Serbia, Bosnia and Herzegovina or Slovenia.

He cited the example of the Novi Sad Biosens Instite, which stands out as one of the best in the world in the digital transformation of agriculture and the food industry, that employs, in its workforce, 70 percent of engineers from the region and only 30 percent from the world.

He added that from the 10 foremost experts in the field of blockchain technology, 7 live and work in Slovenia, that the Microsoft cloud system was made thanks to a company from Nis, and that the payment system developed by Viber, which appears to be the most used in the countries of the former Soviet Union, was developed in Sarajevo.

The first electronic driver’s license is being applied in Kosovo today, Slovenia may have been the first in Europe, 18 years ago, to launch electronic invoices, and Serbia has introduced an Instant Pay system that allows citizens to make purchases by their mobile phone, Cadez noted, adding that it is not a bad situation for a region that has spent part of its past “stressed” and which is perceived as a region of people who does not like to change.

We may have been raised in countries with strong conservative views, but the fact is that we now have world-class digital technology experts, he further pointed.

Speaking about the way Serbia is digitally transformed, Cadez explained that our country started from the youngest, since it is them who will benefit the most enabling them to further contribute to the development of digital technologies in the future. To this effect Serbia intruduced computer science and coding as mandatory from the fifth grade of elementary school till the end of high school.

He also pointed out that using the Austrian model, the Chamber of Commerce and Industry of Serbia established the Center for Digital Transformation, which trains digital consultants and further outsources them to small and medium-sized enterprises to help them adapt to new digital trends.

Cadez announced that such a model of digitization in small and medium-sized enterprises will be extended to other chambers of commerce in the region, adding that this will be done within the cooperation of chambers within the WB6 Chamber Investment Forum and supported by the Austrian Development Agency.

He concluded by stating that the ability of the region to transform itself digitally and to keep up with European standards would depend on the development of a regulatory framework for each country individually which should be in favor of innovation.

State Secretary of the Ministry of Economy of Montenegro Milan Srzentic said that some European indicators show that the Western Balkans are lagging behind the European Union in the field of digitization, adding that the good news is that the gap is narrowing every year.

In some indicators we are better than the EU member states, such as the construction of infrastructure and electronic network, in some others we are somewhere on the European average and there are those fields in which we are far behind. The good news is that the region has plenty of space to make progress in the field of digitization, which gives optimism to believe that we will be able to catch up with the EU very quickly, Srzentic said.

He emphasized that through mutual cooperation the region has a great chance to strengthen its economic capacities and find its place in the global market.

Vice-President of the Chamber of Commerce and Industry of Slovenia Igor Zorko thinks that the region is not lagging behind the EU, but that the problem can be traced to a lack of large companies in the region that could and would hire engineers and developers in the field of IT.

He pointed out that the good news is that the number of start-ups in the region and people working in the field of digitization in companies all around the world is increasing every year, noting that the goal should be keeping those people in this region.

Zorko believes that the West has the time, money and experts, and that we have to create the same but in our own way. He thinks that we are ready to create our own model in a way that the whole region will open borders for people, knowledge, companies and technologies and let domestic knowledge have a greater impact than the foreign.

Director and founder of ČIKOM, a company from Montenegro, Vladan Tabaš said that the basic problem that “slows down” the development of digitalization in our region is an educational system that, he says, is still traditional and does not prepare children for the digital future.

The education system has to be changed and adapted to digital transformation, it has to teach children how to use technology instead of learning about it, Tabaš concluded.

The panel “Digitization and Innovation as a Development Opportunity” was the ninth and final, concluding the International Conference on Economy in Budva, which brought up the topic of synegy as crucial to the economic success of the region.
During the two days of the conference, there were more than 700 representatives of governments, international and regional business community, scientists and experts who discussed infrastructure development, green economy, education, digitization and innovation, energetics,  tourism and demographic structure in the region.
Among the conclusions of the conference one that stands out is that the Western Balkans region seeks synergy from all countries of the region along with the support at the political level so that it can make economic progress and be speed up its integration into the EU.
The conference was hosted and organized by the Chamber of Economy of Montenegro, in collaboration with the Western Balkan Six Chamber Investment Forum.