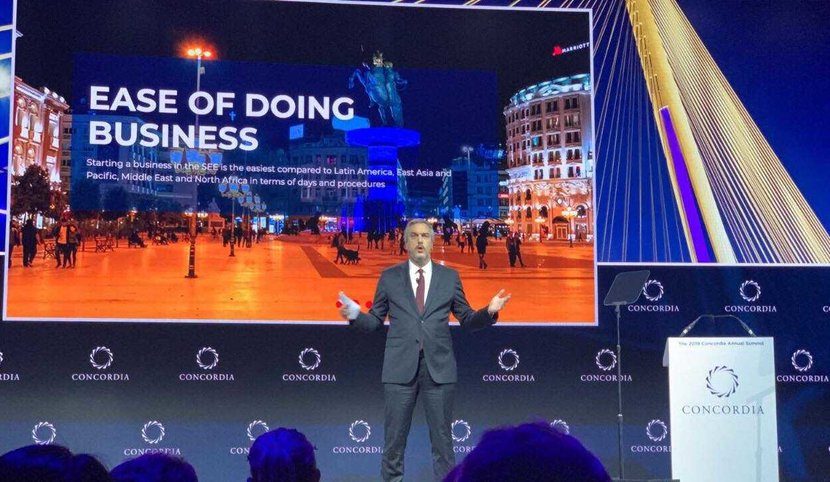 President Čadež invited global companies to invest in the region

The President of the Chamber of Commerce and Industry of Serbia and the Western Balkans 6 Chamber Investment Forum invited today, in New York, the major global corporations and world business leaders, gathered at the Concordia Annual Summit, to come and invest in the Western Balkans.

“I invite those interested in partnerships, interested in seeing the region growing and developing, to contact and visit us” stated Mr.Čadež, speaking on behalf of the regional business community in front of influential public, private and civil sector leaders from all over the world, during the Summit’s plenary session, with more than 600 participants and 300 speakers.

The WB6 Chamber Investment Forum, which brings together six Western Balkans chambers with 350,000 member companies, according to Mr.Čadež, is dedicated to rebranding the region, presenting it to the world, as a well worth investing place that guarantees investors profit.

“We are finding common grounds and interests, thinking about the future of our children, more than the things that set us apart,” Mr.Čadež emphasized.

“We have established a joint online investment platform as a useful tool, with all the necessary information to the interested parties in investing and doing business in the region, as well as guidelines for governments to improve the business climate”he continued, presenting the new picture of the region, which, from the area of ​​bad news and conflicts, is becoming a region of success, common interests and a common future, with these words:

“If you came to this summit by car, that has an integrated environmental camera, that software is made in our region. When lighting up in cities, keep in mind that it is highly likely that the power optimization software is made by firms from our region. If you are a gamer, you love games, the most famous computer games are made by our company “Nordeus”.