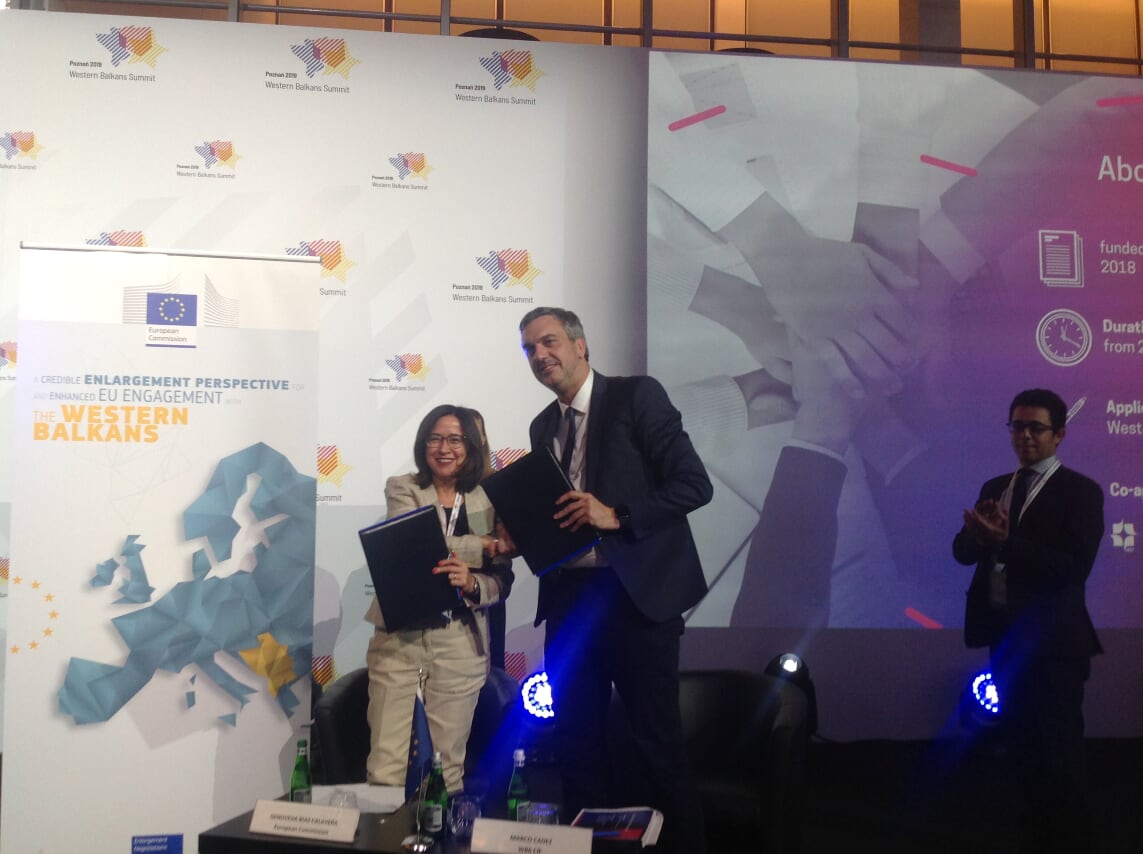 The President of the Managing Board of the Western Balkans Six Chamber Investment Forum (WB6 CIF), Marko Cadez and the Director for Western Balkans at the Directorate General for European Neighbourhood Policy & Enlargement Negotiations Genoveva Ruiz Kalavera, signed a letter of intent for the implementation of a three-year project aimed at raising the competitiveness of the entire region’s economy.

A project for which the European Union has set aside EUR 2.5 million, implemented by the Western Balkans Six Chamber Investment Forum (WB6 CIF), will enable more than 1.200 small and medium-sized companies from all six Western Balkans economies to receive concrete support from the joint regional chamber over the next three years. This support will improve production and export capacities of Western Balkans companies, increase sales to the markets of the region, EU and World, assist companies to become suppliers of multinational corporations, and enable them to better attract financing from European funds and through foreign investments.

“Our goal is to sign more than a hundred contracts worth around EUR 50 million during the project implementation, between regional companies as well as with companies from outside the region. At the same time, our analyses indicate that this project will contribute that the gross domestic product per capita of the region jumps from a third of the EU average to 40% by 2022, also increasing exports and imports of goods and services to 57% and 70% of the regional gross domestic product, and that the commodity exchange within the region will rise from less than 4.5 billion at this moment to 6.6 billion euros in 2022” the Western Balkans Six Chamber Investment Forum stated.

According to Genoveva Ruiz Kalavera, the European Union is convinced that the strong economic integration of the Western Balkans is an instrumental step forward for the region in the EU accession process and that it will contribute to a more efficient business climate and better quality of life for the people of the region.

“In this process, the Western Balkans Six Chamber Investment Forum is one of the main builders of a regional economic area without barriers to trade, and instrumental as being the voice of the business community in communicating with administrations, advocating for a Regional Economic Area and being the main driver of reforms that will enable it”, said Genoveve Ruiz Kalavere.

The agreement between the WB6 CIF and the European Commission will be signed in September, the beginning of the project’s realization is planned for October, and the first services of the joint regional chamber will be available to businessmen by the end of the year.

Thanks to this project, about 200 regional companies will be able to connect at bilateral business meetings organized by WB6 CIF, sixty of them will be supported to enter international supply chains, and the same number of companies will present their products on three major international trade fairs. Also, three major investment conferences are planned, to promote the region and successful business stories to foreign investors. About 60 companies can count on technical assistance in project preparation and application for EU funds and programs, such as Horizon 2020, COSME or Creative Europe.

Businessmen will also have online databases with quality information on individual foreign markets at their disposal, as well as special, individually tailored seminars and workshops on benefits of the regional economic area providing advice and information on how to increase cooperation and successfully internationalize their business.

Special attention will be paid to improving communication between the public and private sectors within the region and the Region with the European Union, in order to improve the common economic area. Three public-private business dialogues between businesses and decision makers are planned, with the participation of about 300 representatives of the business community of the Region. There will be nine studies and research papers identifying obstacles to cooperation in the region with recommendations to the relevant institutions for their elimination.