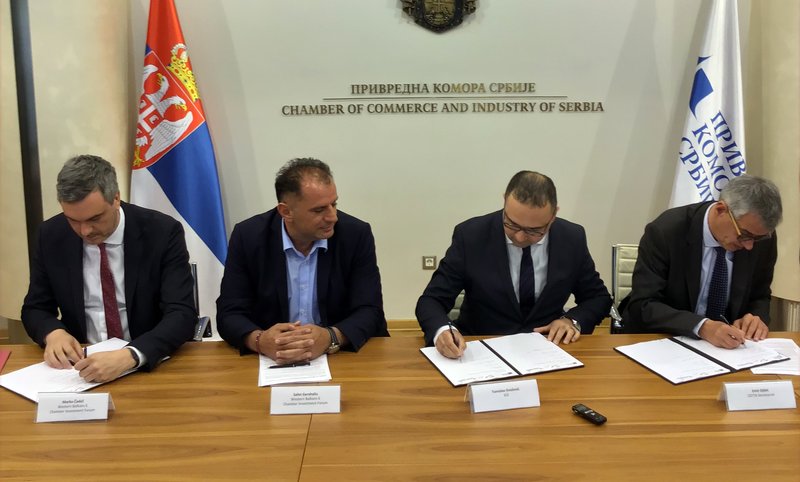 Improving trade in the CEFTA region

on Trade Promotion and Facilitation in the CEFTA. The Memorandum was signed in the Chamber of Commerce and Industry of Serbia, with the aim to remove barriers to trade, harmonize documentation accompanying cross-border movement of goods in the region, and the mutual recognition of veterinary and phytosanitary certificates, as well as other documents needed for the movement of goods.

Marko Cadez, President of the Managing Board of WB6 CIF and President of the Serbian Chamber of Commerce, said that the chambers in the region representing the economy, are trying to find system solutions together with the representatives of the state, and the introduction of the mutual recognition of authorized economic operators (AEO) will enable companies to pass the registration phase in one country, based on ensuring transparency in business, freight forwarding, import and export procedures, and to be recognized throughout the region.

He adds that companies, once we establish this system, will not have problems at the border crossings, because all documentation will be internationally recognized, which is a prerequisite for the functioning of a common and single market.

Secretary General of the Western Balkans Chamber Investment Forum, Safet Gerxhaliu, said that the signing of the Memorandum begins a new era of cooperation in the region.

“The aim of this agreement is to strengthen dialogue and partnership in the region, so that the private sector has the opportunity to be part of the region’s decisions and agreements,” Gerxhaliu said, stressing that it seeks to remove barriers in order to influence economic development and image repairs region.

Only such a region, he says, can be attractive to investors and only in this way can problems be solved. He said that within the Chamber investment forum of the Western Balkans, more than 350,000 companies are members of national chambers.

Director of the CEFTA Secretariat Emir Djikic said that the decision on full cumulation and reimbursement of customs duties on imports from third countries under the PEM Convention will come into effect on 1 July, and that this economy of the region will benefit about 100 million euros.

“Currently, we are working on the mutual recognition of the Authorized Economic Operator (AEO),” Djikic said, adding that in relation to European countries where there are about 17,000 AEOs, there are significantly less, only around 20 in the region, if Moldova is excluded, and that the memorandum aims to encourage the economies to start to function in a manner regulated in the EU and strengthen the capacity to join the European Union.

Tomislav Knezevic said that GIZ has been cooperating with the CEFTA Secretariat since 2012, and that in the past six years a large number of activities have been implemented aimed at strengthening trade in the territory of South-East Europe, as well as reducing the barriers that are present in the trade.

“Since we all have common goals, which is the integration of this region into the EU and improving trade and business, we decided to support further activities and to bring it all to a new level. One of these steps is the formal signing of the Memorandum” Knezevic said.