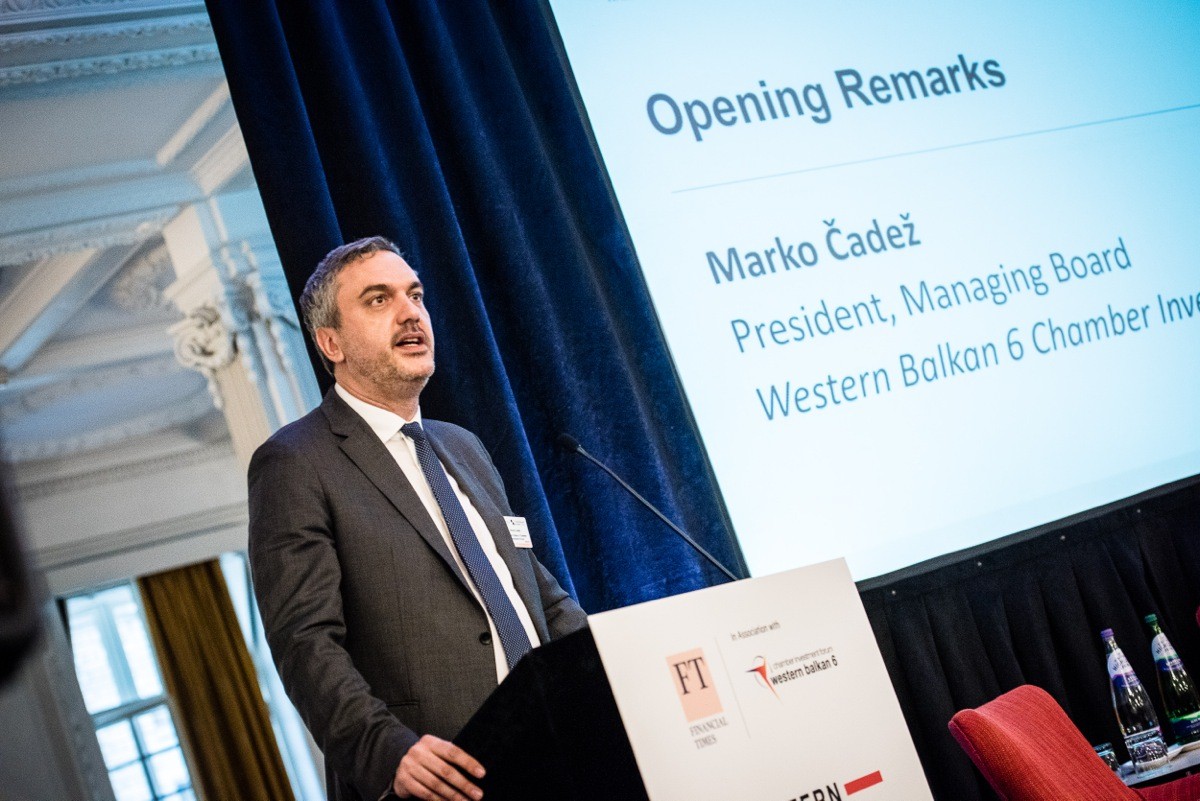 Cadez: It’s worth investing in the Western Balkans

President of the Chamber of Commerce and Industry of Serbia, Marko Čadež, told potential investors from the world that it is worth investing in the Western Balkans region.

“Whoever invests in the Western Balkans for the next five to seven years, every euro invested will pay off more than in any other region of the European continent,” said Cadez to the leading managers of more than 70 multinational corporations gathered at a business forum organized by the Western Balkans Six Chamber Investment Forum (WB6 CIF) and the Financial Times.

Among participants in the Forum there were representatives of global companies like Siemens or Rio Tinto, investment banks and funds such as Morgan Stanley, Nomura, MUFG Bank, State Bank of India, Commerzbank, BNP Paribas, BC Partners and MidEuropa Partners, representatives of the London Stock Exchange, consulting companies, marketing agencies and agencies dealing with market research.

Cadez pointed out that this was an opportunity for concrete talks with potential investors interested in investing and investment opportunities in the Western Balkans, but also for the presentation of successful companies from the region.

Investment opportunities are enormous, according to Cadez, and as an example he pointed out to the digital economy, which is growing at a double digit speed, not 10, but 20 percent and more.

That our economy is worth the investment is shown by the example of Coca Cola, which bought a company worth 200 million euros, Cadez stated. The Forum also discussed accession negotiations with the EU, and Cadez pointed out that the Western Balkans is already part of the European economy.

“We are bound by trade and production with European players and thus we are already part of Europe,” said Cadez, who is the President of the Managing Board of the WB6 Chamber Investment Forum.

The participants of the FT forum “Investment opportunities in the fast growing region” were addressed by the Prime Ministers of Serbia, Albania and Northern Macedonia – Ana Brnabic, Edi Rama and Zoran Zaev, ministers of the Western Balkan governments, as well as by representatives of financial institutions – the European Bank for Reconstruction and Development, the World Bank and the European Investment Bank and international companies.

The prime ministers of the region agreed that further connecting is the key to faster economic development and the success of the Western Balkans.

“We have made the region more stable, more and more connected. If we continue, a bright future is ahead of us, “said Ana Brnabic, the Prime Minister of Serbia.

The Prime Minister pointed out that Serbia is progressing year after year, that for several years now it has been the most successful in attracting foreign direct investments thanks to the reforms it has implemented. In the first five months, investments worth 1.2 billion euros have been recorded in Serbia, which is 17 percent more than in the same period last year, said Brnabic. She announced the continuation of reforms and attracting investments in areas such as the creative industry.

The Prime Minister of Albania Edi Rama estimates that the Western Balkans is going through a very interesting time, that the results of the reforms are visible, but that more intensive regional cooperation and interaction is needed for higher growth.

And the Prime Minister of Northern Macedonia, Zoran Zaev, pointed out that the countries of the region are determined to mutually connect. A common market, according to Zaev, is interesting for investors because it represents a market of 20 million people.

The General Director of Siemens Mobility Arnulf Volfram stressed that payments to investments in the Western Balkans, especially to Serbia, were positive, and that investors can only recommend investing in the region.

EBRD President Suma Chakrabarti also estimated that the region of the Western Balkans is very interesting for investors and announced that EBRD will continue to cooperate with governments and investors from the region.