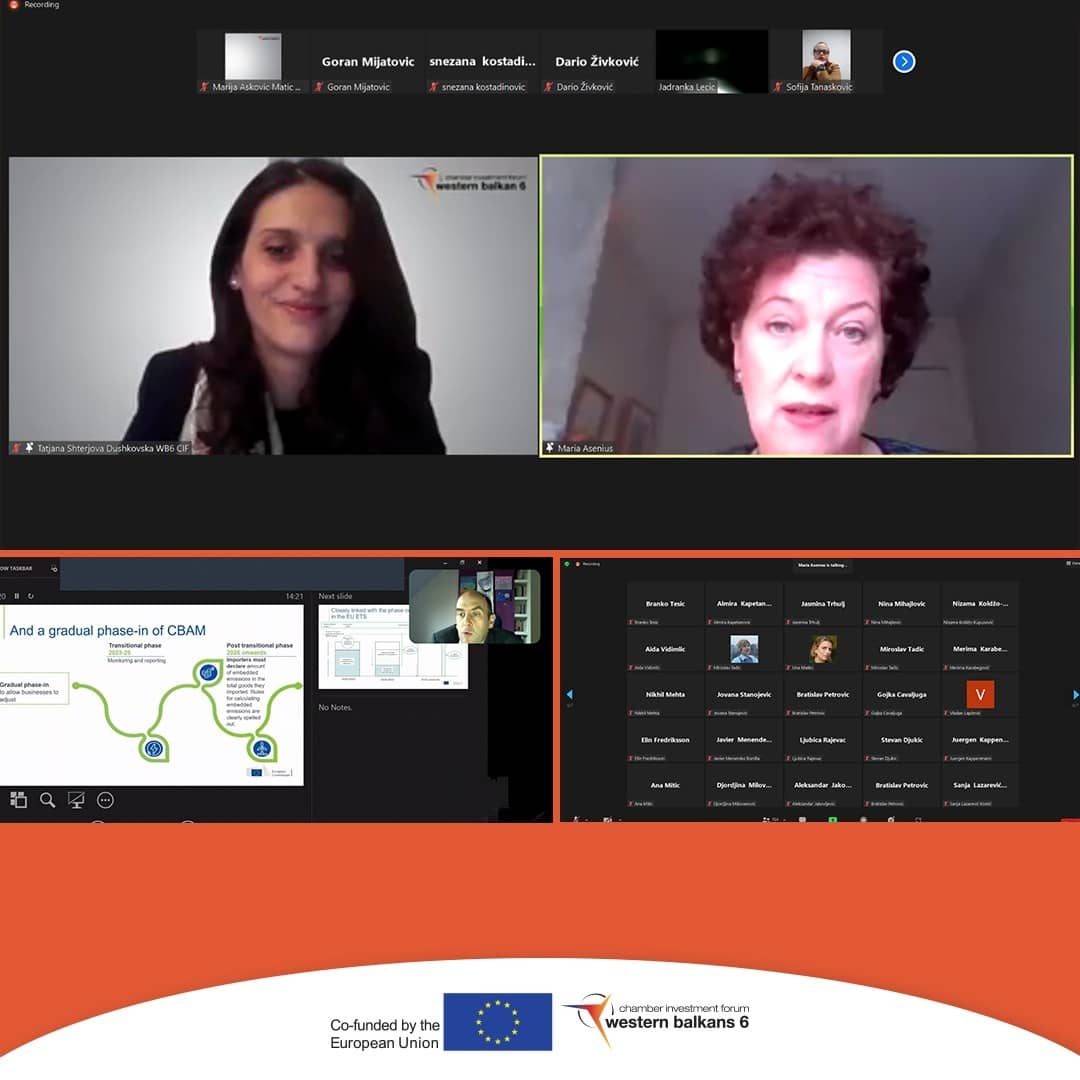 The Western Balkan Six Chamber Investment Forum (WB6 CIF) in cooperation with the European Commission (Directorate-General for Neighborhood and Enlargement Negotiations (DG NEAR) and Directorate-General for Taxation and Customs Union (DG TAXUD)), successfully organized a working meeting on which the proposed outlines of the Carbon Border Adjustment Mechanism and its potential effects on the operations of WB private sector were discussed, with participation of more than 170 participants-representatives from WB companies.
The Carbon Border Adjustment Mechanism (CBAM) is part of the proposed measures under the “Fit for 55” package which will also directly affect the Western Balkans companies, which is designed with the idea to prevent the risk of carbon leakage and support the EU’s increased ambition on climate mitigation, while ensuring WTO compatibility. The proposal provides that the CBAM system will be phased in gradually and will initially apply only to a selected number of goods at high risk of carbon leakage: iron and steel, cement, fertilizers, aluminum and electricity generation. A reporting system will apply as from 2023 for those products with the objective of facilitating a smooth roll out and to facilitate dialogue with third countries, and importers will start paying a financial adjustment in 2026.
At the very beginning participants were welcomed by Tatjana Shterjova Dushkovska, Secretary General of WB6 CIF, who pointed out that this working meeting, is held at the initiative of private sector to discuss about Proposal of carbon border adjustment mechanism with representatives of EU. She underlined that this meeting was held under the wider framework of the WB6-EU Business Platform, which has been officially launched and established on June this year, with a single purpose on working forward towards enhancing communication and cooperation between WB6 private sector on one hand and EU institutions on other hand. The topic of the meeting is connected to the European Green Deal, under which the EU has set itself a binding target of achieving climate neutrality by 2050, and the Western Balkans Green Agenda, supported by WB policy makers, and further developed with the Action plan for introducing the Green Agenda, which has been adopted in October on the Summit in Brdo. This goal requires current greenhouse gas emission levels to drop substantially in the next decades.
Mrs. Maria Asenius, representative of DG NEAR, noted the importance of the topic of this working meeting, and pointed out that we have to set more ambitious goals for the future to protect the planet and the European Commission is committed to save the planet. In July 2021, The European Commission has presented the first series of adopted files under the ‘Fit for 55’ package. The package contains legislative proposals to revise the entire EU 2030 climate and energy framework, including the legislation on effort sharing, land use and forestry, renewable energy, energy efficiency, emission standards for new cars and vans, and the Energy Taxation Directive. As an intermediate step towards climate neutrality, the EU has raised its 2030 climate ambition, committing to cutting emissions by at least 55% by 2030.
Mr. David Boublil from DG TAXUD, held a presentation about the proposed Carbon Border Adjustment Mechanism. Mr. Boublil pointed out that the basic concept of CBAM is Equal carbon pricing and no double pricing. This means that EU businesses pay a carbon price on their production in the EU, so imports will need to pay a carbon adjustment, corresponding to the price they would have paid if the goods had been produced under the EU’s carbon pricing rules (ETS). The CBAM charge will be adjusted to reflect the level of EU ETS free allowances allocated to EU production of sectors in scope. If a non-EU producer can show that they have already paid a carbon price for the production of the imported goals in the third country, that amount will be deducted for the EU importer. The sectors on which the measures will be focused on the first phase are the sectors which have high carbon emissions. This sectors are cement, iron & steel, aluminum, fertiliser and electricity.
CBAM is open to and intensives decarbonisation in third countries and favors international coordination thanks to five-tier system:
1. Actual emission technology
2. Countries applying EU ETS or lined to it will be excluded
3. Deduction of the carbon price paid in third countries from the adjustment on imported products
4. International agreements on how to take in the account carbon price
5. Special rules on electricity for countries whose electricity market is “coupled” with the Union international market for electricity
The presentation of Mr. David Boublil from DG TAXUD, was followed by a constructive discussion, moderated by Mrs. Marija Askovic Matic (WB6 CIF) , during which representatives from the private sector had an opportunity to ask clarifications about the proposed CBAM mechanism, and their obligations in order to comply with this mechanism.